Introduction
Compared with the situation in the United States -that is if HPV-news gives us a balanced impression- sprintmachines have never really caught on in Europe. The few machines we do have over here are usually Vector-copies, although there are of course some (usually English) exceptions, the most notable being Blue­bell, Poppy Flier and the Bean. Practical machines are the norm, not surprisingly if one considers the hassles of trying to find a suitable test track for a proper sprint machine. Dutch roads are windy, narrow and busy, and above all difficult to close of legally.
Of course these small matters will not deter determined constructors, especially once they have agreed to build a streamliner in a fortnight.( Yes it was late, but No, we hadn't been drinking so Yes, we're probably slightly mad). Reasons to build a sprint­vehicle were several:

Nearly all sprint machines we have seen will not travel in a straight line. This is of course wasteful as : The rider is probably the most important factor here. A top-class athlete is hard enough to come by without expecting him to put up with an extensive familiarization period to adapt to the vehicles deficiencies.
Our main object therefore was to build a dynamically stable vehicle and leave the aerodynamics till later.
We also thought a prospective rider would feel more comfortable in three-wheeler than in a single-track vehicle (with all it's inherent side wind problems) although in a crash a two wheeler could well be safer. The near-circular section of most three-wheelers makes them much more prone to a barrel roll, while the popular canopies reduce the strength of the shell considerably.

However as for production reasons our shell would have to have a flat bottom, we settled for a three-wheeler. A rearwheel-steered vehicle will never feel as safe as a front steered one (al least we have never built/riden one which comes close), so from a psychological point of view it would have to be a front steerer. Low rolling resistance is of course another necessity, and here we decided a single front wheel would be superior as it bypasses all toe-in/toe-out problems of a steered axle. A reclining seating-position gives more power than a prone position and would be more familiar to the prospective riders (car-like). (a normal cycling position is of course even better, but offers to big a profile and the C.G. would be way out.)

Nothing good has ever come of a chain-drive with lots of pulleys and lots of free lengths whipping around (ask Moser) so we would have to have frontwheel-drive as well.

In fact this all is starting to sound much like an Allegro or Poppy Flier, but we were not too impressed by them. For instance how can you expect Allegro's three crankshaft bearings to stay inline in what must be a flexible body-shell? And we certainly were not going to spend massive amounts of time and money (our budget was only $200) on a mould for a body shell (which the first time invariably turns out to be too short, narrow or whatever).

But then of course we had to come up with something different in order to stay within our meager budget and our self-imposed time limit.

The design brief for the drive line held quite a few requirements: For the drawing board we felt this could be translated into a steering axis in the plane of the wheel, adjustable trail and derailleurgears. To clear the front wheel on full lock the chain­line has to be moved over to the right and this either means an asymmetric weight distribution or a "sidewinder"setup. We opted for the latter solution and therefore we had to build a crankshaft as a lay shaft was of course not acceptable.

The final design is shown in the illustrations.

The crank set consists of a center tube (ovalized down tube) with two high carbon axles brazed in welded-in sockets. The pedal tubes run on needle bearings with bronze thrust washers taking up side slack. Two standard cranks are bolted on the tapered ends (we use the cranks the "wrong" way up) and two-selfaligning bearings are fixed to the pedal threads. The right-hand bearing stub also locates the borrowed 100 teeth chain ring while a hose clip transfers the drive torque. The whole assembly is mounted in a thin-walled steel sub frame, which also takes the front-hub assembly.The hub-bearing assembly is a fabricated item with a steering offset of 50 mm (2"). This means that some sideways movement of the drive shaft has to be accommodated. The drive shaft cum U-joint is built up from a thin-walled tube with end pieces brazed on.
The homemade U-joint runs on ball bearings and a tapered axle-end transmits the drive torque to the road wheel. .

The caster angle is adjustable by rotating the hub-assembly in its mounting, but obviously this also affects the ride height.
The steering arm is as long as possible to diminish problems, which could arise from play in the heim-joints or flex in the push-pull steering rod The front wheel features a plywood rim connected to the alloy hub by 4 spokes made out of 5/8"conduit bolted and glued in place.
The drive shaft is free to move sideways .This is accomplished by mounting the endbearing (again of the self aligning type for obvious reasons) on a swing arm, which also mounts the derailleur.
The gear-changer is modified to take the cage on the outside. The body therefore does not protrude outside the chain line.
The 20" rear wheels (wired on tires) use hubs with pip-pins. The axle tube was made in a lathe so alignment problems were kept to a minimum. Two triangles of light tubing connect the back-axle to the body. Lateral stiffness in the truss is provided by two lenghts of welding rod brazed in place. The rear frame also provides the mounting points for the two sidepull-brakes. Access to the rear-wheels and brakes is extremely good (the cardboard belly-pan is only taped in place) so it's easy to adjust the brakes so that they will not drag. 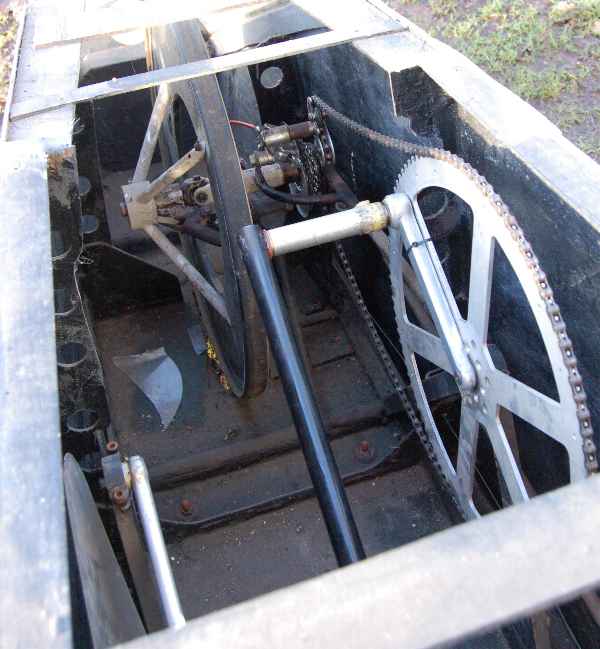 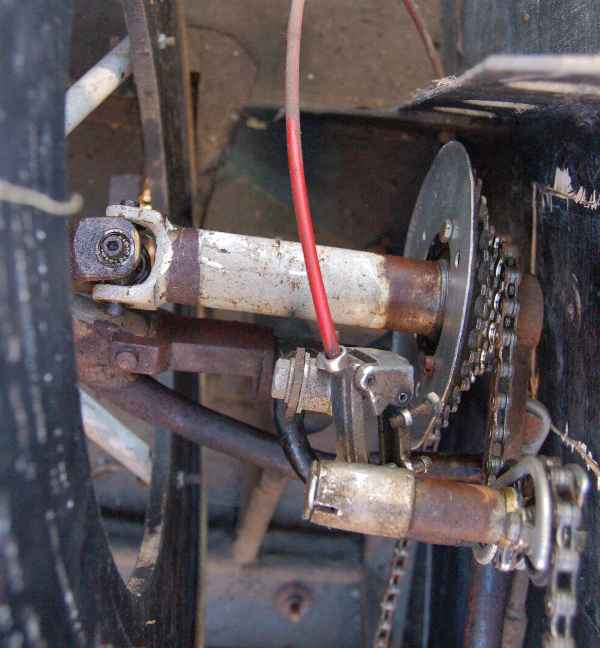 The body of Cafe Racer is constructed out of 1/8" plywood. 2mm plywood would perhaps have been more appropriate but it is much more expensive. The sheets are joined by a method known in boat-building circles as"stitch and glue". A tornado-class catamaran is a nice example of the art. The 3-D shapes which can be obtained are surprising, but as this was to be our first attempt we have been rather conservative and as a result the vehicle is far to angular to expect good aerodynamics.
A flat bottom was used as it greatly simplifies construction by providing a convenient measuring plane. In a borrowed livingroom the carpet was rolled back and a couple of 4 by 4's were nailed to the floor to provide a working surface. The floorpan was temporarely tacked in place and the bulkheads were cut and positioned. The next step was rough-cutting the sides and stitching them into position. Instead of thread and needle we used a power­drill and plastic-coated copper-wire. The plastic coating is essential as it will not stick to the epoxy we used to glue it all together and so we are later able to remove the wire.
Depending on the expected loads we either used E-glass tape and epoxy or only a fillet of resin and microballoons smeared along the joint. When cured all staples and bits of wire were removed (much better for all planing and sanding operations) and foam­blocks for the trickiest shapes were cemented in place. The roof of the vehicle is also made out of roofmate and it was shaped with an electrical plane. (the actual shaping only taking minutes in sharp contrast to the vacuum cleaning afterwards. The foamparticles wind up with an electical charge and will stick to anything, including windows to the chagrin of curious neighbours.)

As mastering the art of vacuumforming great expanses of plexiglass was deemed to be to time and cash consuming we opted for flat windows. Nowadays the windows are not only taped but bolted in place as well as first we kept loosing them when transporting the vehicle on a carroof.
Entry is by removing the center roofpanel.

Vehicleweight is a rather disappointing 40 kgs but we have an excellent professional paintjob (Courtesy of EBAG-trucks) which surely weighs 5 kgs!
And although low weight is very handy when storing or transporting the vehicle our computersimulation points out that minimal weight is not all that important.
Handlingwise our vehicle turned out to be a disappointment. From day one it handled fine so we had to shelve our envisaged development program.
At the European Championships we came second with a totaly untested vehicle and a mediocre rider. Upcoming heavy sidewinds spoiled our last runs and finally finding top-gear means little when you lift a wheel in the traps. So in the end we only managed 82.16 against the experienced Gerhard Scheller's 92 in the Gronen Vector.

Subsequent testing at the Oldenburg University (BRD) by prof. Falck Riess and Rainer Pivit revealed a stunning CDA factor of 0.110 ± 0.016 (m2), which translates into a dragfactor of around 0.27. The rolling resistance was rather better with .0446 ± .0024, especially when one considers the mediocre quality of the wheels involved.
Our drag-factor (measured by averaging 10 decellerations in the corridors of the university) is in marked contrast to claims madeby everybody else, Gronen for instance claiming 0.07. In our opinion this justifies our conclusion that to go fast, you first of all need a good handling vehicle. It also probably means that some claims are perhaps slightly optimistic.

Notes
CafeRacer was originally build with two 28" wheels in the rear with a upwards sloping tunnel in between, so in fact the vehicle appeared to have two tails. This proved to be an aerodynamic mess and the wheels probably never tracked .We only managed 60 kph and with tufts and video we found a large mass of stagnant air around the tail. So two days before the championship we converted to two 20" wheels and a normal tail-configuration

With our construction this was not much more involved than cutting through the glass tape, bending the panels in the required shape and making a new bulkhead and glueing on another block of foam. We didn't even had to disturb the paintjob ,some small touching up on the morning before the race being all that was needed. It did however impose some logistic problems as it meant that we had to go racing with two trikes and a twowheeler, and only six wheels to share between them!

Bolting the shoes to the pedals was another bad idea, which turned out to be very tiring when waiting. We soon converted to the system as used in the Elgar Clip trick pedal . Our version is however three times as big.